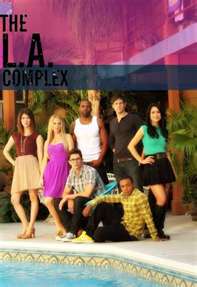 Okay, so it's not that show, but The L.A. Complex is definitely a very close relative.  How could it not be, what with an impossibly incredible Los Angeles apartment complex full of beautiful young people who all know each other ... some biblically ... whose lives we can't help but get sucked into?  Okay, I can't help.  What can I say ... I dig shows like this.

In this new CW show, the six main players are all pursuing their various showbiz dreams.  There's Abby Vargas (Cassie Steele, Degrassi: The Next Generation) a Canadian transplant whose life is the messiest - completely broke, can't work (illegal immigrant), lives out of her crappy car, long-distance boyfriend who just doesn't understand her dream - yet she manages to look great, be clean and, thanks to her small-time manager, get auditions.  Unfortunately, she often messes up her opportunities as well:  moments after doing "actually not that bad" at a big one for her favorite director, she pukes all over the place (it's not nerves, just a side effect, but more on that later).  Great impression.  As the director puts it, "once there's vomit on the piano, the audition's over."

Then we have our other actress, Raquel Westbrook (Jewel Staite, Firefly, Stargate: Atlantis).  To say this gal is a bitch is the understatement of the year.  Our new Amanda Woodward.  OK, let's be fair:  she's a former TV star who now can't get arrested.  Her contacts have nothing for her, she's considered too old (at 30!  Well, it is Hollywood) and no one will let her read for anything (hey, at least she's willing to read!).  But seeing as how she's extremely role-choosy, full of excuses, bitter as hell and thinks Tinseltown should be kissing her assets, she ain't helping her cause much.  Interesting to see Staite in this shrewish role ... still think of her as sweet Kaylee on Firefly.  Huh.  Guess I'm doing the same thing to her as is being done to Raquel.  Interesting ...

Moving on, there's Connor Lake (Jonathan Patrick Moore, All Saints, Neighbours), the hottie Australian who seems to be the most successful, having had his medical show pilot just picked up for series.  He moves out of The Lux (the nickname for the L.A. building centerpiece) to a home he just bought (guess no one told him to maybe wait a season or two before committing to property) but seems quite lonely.  I'm guessing he'll be back at the Lux very soon.

Nick Wagner (Joe Dinicol, Life With Derek) is a coffee barista-by-day, struggling stand-up comic-by-night.  Very struggling ... he's not funny.  Adorable, sweet, always there for his friends, but not funny.  As he is harshly told after a tanking his big break at the Improv,  he has no point of view and should quit.  You know you want to root for him to find his voice and c'mon, you know he will!  That's how these shows work, people!

Tariq Muhammad (Benjamin Charles Watson, Soul) is an aspiring rap artist who currently works for a big recording star.  He's the typical lowly intern who fetches food and sustains monumental abuse from those around him.  When he sneaks one of his own tracks in to an email, he thinks it's curtains for him when he gets busted.  But turns out, the artist liked his beat.  Of course, Tariq won't get the credit, but in his heart he knows he's done good and needs to just suck it up and stick with it.

Lastly there's Alicia Lowe (Chelan Simmons, Kyle XY), the dancer.  She goes to dance class, works out for hours to keep in shape and does well at auditions.  But she never seems to book the job (after an audition for an upcoming Usher tour, she tells Nick "I wish I would have heard by now," to which Nick matter-of-factly replies "We all should have heard by now.").  Why do we love this horrible business??  At least she's got steady work.  Can you guess what she does?  Yep.  Stripper.  Excuse me ... exotic dancer.  The stereotype to the max.  But hey, looks like she's the answer to Abby's prayers:  she can get her new friend a job at the club under the table, so who needs that silly little work Visa thing!

Now to the good stuff.  Of course there was one-night-stand sex.  Roof sex, no less, between Connor (who funded an elaborate complex party complete with live band,  alcohol and ecstasy - did I mention the building has the most amazing central pool lit by blacklight at night?) and Abby.  Shockingly current conversation the next morning:  Abby asks if Connor wore a condom, he replies no and couldn't she tell, feel that it was just skin (yep, actual dialogue)?  Of course not, she declares! She was high on X and that EVERYTHING felt like skin.  He says he's clean, was just tested, she says she's clean, not actually tested but she has a boyfriend.  He asks if they should get one of those "morning after" pills and offers to pay for the pill and breakfast, showing her that there's at least one good guy in L.A.

I kid you not.  That's this show.  And I love it!!  There were SO many cringing moments:  the sad Improv show, the puking at the audition (the side effect I mentioned earlier - the morning after pill makes you incredibly nauseous), the utter bitchiness - and racist-ness - of Raquel.  But these are the elements of a guilty pleasure and I'm hooked.  Not proud, but definitely hooked.

Can't say the show does Hollywood any justice.  I know there are a lot of nasty, mean, ugly people in  the business, but I've had a lot of pleasant encounters in my pursuit of the acting dream.  I wonder if L.A. Complex will ever show any warmth within the industry or just make Tinseltown a horrible wasteland of bitterness, beat downs and dream killers, making us root for our sextet that much more (well, except maybe Raquel.  Did I mention what a bitch she is?).  Probably the latter.  As I said, nothing really new or ground-breaking here.

Bottom  line:  Get a complex for this guilty pleasure!


The L.A. Complex airs Tuesdays at 9 p.m. on the CW (the network was actually mentioned within the pilot episode ... shameless!).