Actually one of the good ones ... 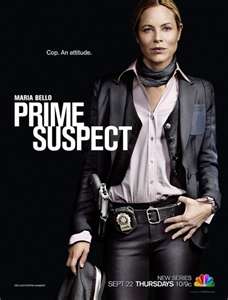 Can't say I understand what's going on over at NBC.  Shifting a good portion of their schedule around, tabling new previously-planned pilots, etc.  Their latest move is shutting down the Thursday drama Prime Suspect, starring Maria Bello.

Granted, the show hasn't been a runaway hit (averages approx. 5 million viewers), but it is a decent program with a strong lead character.

The show hasn't officially been axed, but this isn't a good sign.

Do you watch Prime Suspect?  Comment below and let me know your thoughts.
Posted by Your TV Tour Guide at 11:02 PM 2 comments:

Time for the People to Speak!

It's time for the People's Choice Awards.  Time for you to cast your vote for your favorite TV shows (movies and music, too).  Be it Drama, Comedy, Reality Competition  along with Actors, Actresses and Personalities...tell us who your favorites are.

Vote for any or all here:  http://www.peopleschoice.com/pca/awards/nominees/

Me?  I'm voting for Supernatural, How I Met Your Mother and Revenge, among others.

You?  Comment below and tell me who and what you support!
Posted by Your TV Tour Guide at 7:47 PM No comments: