Hi-dee-ho, Tourists!  Sorry I've been away so long ... took kind of a pseudo-hiatus, but I'm back and ready to talk more about all that is TV! 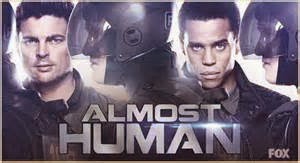 Kicking things off is my review of FOX's new sci-fi/drama Almost Human, which premiered last night and airs its first non-pilot episode tonight.  The show has been getting a lot of positive press and buzz, and it has quite the pedigree, coming from executive producer J.J. Abrams (Fringe, Lost, Alias) and creator/executive producer J.H. Wyman, who was behind the brilliant Fringe, which completed its five-season run earlier this year.  I loved Fringe and am a huge Abrams fan, not to mention I really like Karl Urban from way back to his days on Xena: Warrior Princess (he played the deliciously evil Julius Caesar) and most recently as Dr. Leonard "Bones" McCoy in the latest Star Trek movies (also from Abrams), so my own expectations for this were high for this new series.  Did it live up to them? 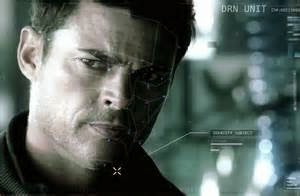 Almost Human is an action-packed police procedural set 35 years in the future, when police officers are partnered with highly evolved human-like androids. Urban plays Detective John Kennex, a cop who survived one of the most catastrophic attacks ever made against the police department. After waking up from a 17-month coma, he can't remember much – except that his partner was killed, he lost one of his legs and he is now outfitted with a highly sophisticated synthetic appendage. Suffering from depression and PTSD, he returns to work. 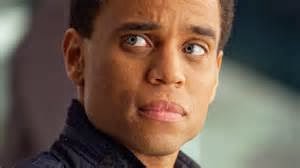 After a first pairing with an android partner fails, John is teamed with Dorian (Michael Ealy, Common Law), a discontinued android with unexpected emotional responses. With John being part-machine and Dorian being part-human, their understanding of each other both complements and connects them.

The pilot's opening action sequence reminded me of another FOX program - Firefly, where in lieu of exposition, you are given an explosive but rather quick back story, then thrusting us into the present.  I appreciate this method of narrative - pulls you right in.  The show has a dark, gritty vibe to it - it's been likened to Blade Runner - and a pretty cool soundtrack.  It definitely is reminiscent of its unofficial predecessor, Fringe, in look and feel, but I wonder if AH will work in the heart and warmth Fringe had throughout its run.  I can tell the relationship between Kennex and Dorian is going to lead to some fun banter and humorous interplay, which I always enjoy in "buddy cop" shows. 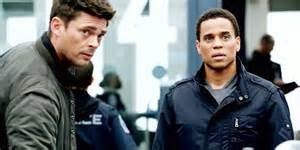 I like Urban in the lead role.  He pulls off Kennex's disgruntled, brooding attitude well (and with a very believable American accent - he's a native New Zealander).  The android policemen are a little creepy, but that, too, works.  Makes you understand Kennex's apathy toward them - although his pushing one out of a moving car, causing it to be squashed by a series of vehicles, was rather harsh.  As for Ealy, I buy into his portrayal of an artificial life form.  He emotes a nice balance, adding just enough humanity into Dorian (calls himself "the partner with the bleeding heart).  I'm not sure if Ealy's eyes are as blue in real life as they are on the show, but if they're not, it's a nice touch.

Dorian's ongoing challenging of Kennex - calling him on his attitude and prejudice of "synthetics" - creates a tension that adds a dynamic layer to their relationship.  Ultimately, together, Urban and Ealy make a great team, and I look forward to watching their partnership - and inevitable loyalty to each other - develop.

The special effects - and there are a lot - are pulled off seemlessly, not overdone but realistically what could potentially exist in the far-near future (the Segway still exists!).  There is also a touch of ick factor - not Fringe-level (yet), but given the show's parentage, is likely to be worked in throughout the series.

A weak spot in the show is Taylor.  I really like the actress, but I think she is sorely miscast in the role of police captain.  I don't think she pulls off the authority needed.  If she were a fellow cop in the precinct, that I would buy.  But I am glad to see a woman in a power position.  Just needs to be someone maybe a little older or of a different muster ... immediately coming to mind are CCH Pounder or Katey Sagal. 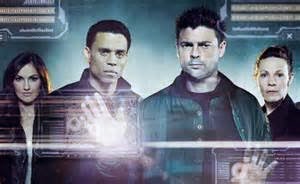 I like the show and the pilot set up an interesting world to return to with lots of requisite questions-yet-to-be-answered (Who set up the initial ambush that led to Kennex's injury?  Where is his girlfriend?  Why was Dorian put in cold storage?).