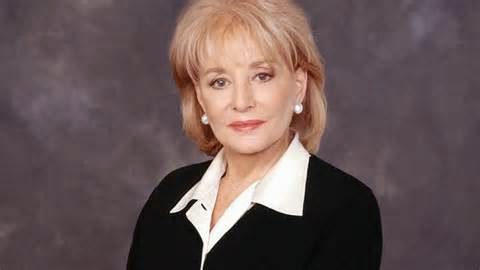 It was a very emotional week leading up to television legend Barbara Walters' final on-screen appearance (though I'm sure she'll pop up sometime, somewhere ... Dancing With the Stars?), which was on the show she created 17 seasons ago, The View.

The program had some epic moments, particularly when everyone who has ever been a co-host - 10 in all, among them past hosts Meredith Viera, Debbie Matenopolous, Joy Behar, Lisa Ling, Star Jones, Rosie O'Donnell, and Elizabeth Hasselbeck, and current hosts Whoopi Goldberg, Sherri Shepherd, and Jenny McCarthy - came on to share their favorite Barbara memories.  Another was when many of the top newswomen and TV personalities today - among them Oprah Winfrey, Diane Sawyer, Jane Pauley, Katie Couric, Connie Chung, Gayle King, and others - came out in tribute to the legacy Barbara is leaving behind ... charting the course for women to have careers in the field.

I will certainly miss her "Most Fascinating People" specials every year, and have missed her Oscar specials since she stopped doing them a couple of years ago.  Hard to believe she's walking away from all of it, but she has said she's certain the time is right.  Whether she'll go the way of Johnny Carson, who was never seen publicly after his retirement from the Tonight Show, only time will tell.

In any case, Barbara Walters has left an indelible mark that will be honored and a legacy that will be cherished for decades to come.

Posted by Your TV Tour Guide at 6:18 PM No comments:

There's been new news on the upfronts ... front, including more renewals/cancellations and more shows picked up.

CBS has let the axe fall hard, cancelling The Crazy Ones, Intelligence, Friends With Better Lives, Bad Teacher, and Hostages.  They have picked up two spinoffs of two of their hit series, bringing NCIS: New Orleans and CSI: Cyber to the airwaves.  They have also gone with Madam Secretary, The Odd Couple reboot starring Matthew Perry, Scorpion, The McCarthys, and Stalker.  The press had reported that How I Met Your Dad  had been green-lighted, but apparently they had jumped the gun ... it's not confirmed to be part of the upcoming season.

The alphabet net has renewed Tim Allen's Last Man Standing and the country music-based Nashville, as well as the ever-popular Shark Tank and The Bachelor.  They have pink slipped Suburgatory and Super Fun Night.

The peacock net has pulled the plug on on Revolution and, very sadly, Community (no six seasons and a movie *sniff*) and picked up Bad Judge, Mission Control, One Big Family,  and renewed Hannibal and About a Boy.  No word yet on Parenthood.

There are SO many new shows coming later this year, I don't know where they're going to all fit!  I guess between the fall and mid-season, things will find a place ... especially after shows start getting inevitably cancelled.

I'll keep you posted as updates come about!

Posted by Your TV Tour Guide at 4:32 PM No comments:

Hideeho, TV Tourists!  Apologies for not posting for a while, but I'm back with a plethora of information regarding results from network TV's annual shopping spree - the Upfronts, from which each decides/announces what new shows they'll be premiering, which have been renewed and which are going bye-bye.  So, here's what we know:

ABC went on quite a binge, picking up many new series that will be premiering both in the fall and mid-season.  ABC is continuing their love affair with Shonda Rhimes, renewing her smash hit Scandal and long-running Grey's Anatomy and picking up her new drama How to Get Away With Murder.  To go along with their action-packed series MARVEL's Agents of S.H.I.E.L.D., they have committed to Agent Carter (based on the lead female character from Captain America).

Recent renewals:  Once Upon a Time, Resurrection, Revenge, The Goildbergs, Castle, and Modern Family.

Personally, I'm hoping the net decides to stick with Nashville and Trophy Wife.

CBS has pretty much stuck with their current roster of shows across the board, renewing virtually everything.  One new addition will be How I Met Your Dad, with Meg Ryan as the voice of the Mom.  Early word is that it will be far different from its predecessor How I Met Your Mother, which took its final bow recently after an amazing 9-season run - which could be either a good thing or a bad.

I watch quite a bit of CBS programming, so I'm thrilled to not have too many changes next season.

The CW is having a bit of the changing of the guard, dropping The Carrie Diaries, The Tomorrow People and Star-Crossed and picking up The Flash (which got a great intro in an episode of Arrow), the new RobThomas (the man behind Veronica Mars) drama iZombie, Jane the Virgin, and The Messengers.  They passed on the Supernatural spin-off Bloodlines (which, frankly, I'm glad.  It was not worthy of its predecessor's name).

Recent renewals:  Heart of Dixie, Beauty and the Beast, and The 100.

FOX is one of the networks I watch the least ... I think Sleepy Hollow (renewed, yay!) is the only show I watch.  Maybe that will change considering the deluge of new series coming to the net in the coming months.  The only one I know anything about this early on is Gotham, which will get FOX into the superhero game along with the CW (Arrow, Flash), ABC (S.H.I.E.L.D.) and NBC (see below).

The net has cancelled Dads, Enlisted, Rake and Surviving Jack, and American Dad is moving to TBS.

Along with FOX, I don't watch much of the Peacock net (Parenthood, which has been renewed, is exceptional).  They, as I mentioned above, are going to premiere their superhero series Constantine, based on the DC Comics character.  Debra Messing is sticking with the net (I admittedly miss Smash) with the new dramedy The Mysteries of Laura.

Other new series:  A to Z, State of Affairs, Allegiance, Odyssey, Marry Me, Working the Engels, Aquarius, Emerald City, and Tooken.


Now granted, I know very little about most of these new shows, but will learn more in the coming months and will share accordingly.  One thing that is a very hot trend continuing to grow is the short-order series (average 13 episodes).  The days of the 22-episode run seems to be going be the wayside more and more.  Guess they see how successful the formula works on cable.  On the upside, they tend to let the entire series run consecutively without breaks (hiatus is SO annoying).  On the downside, if a series is awesome, you get so much less of it and have to wait so long for its return.

Feel free to share in the comments which you prefer.  And come back for further info on all things new TV!