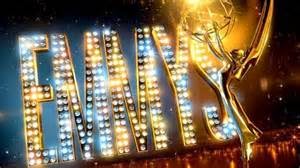 The results are in and as usual there are some surprises (Orange is the New Black shut out), some not (Modern Family ... again), and some well-deserved triumphs (Breaking Bad and its cast).

Personal shout-outs to American Horror Story: Coven winners Jessica Lange and Kathy Bates as well as to Benedict Cumberbatch, Martin Freeman and Steven Moffat for Sherlock.  Boo for no wins for the amazing Orange is the New Black and Game of Thrones.

And next year, Emmys, please recognize amazing shows like Suits and The Walking Dead in all categories!


Here are all the Winners: 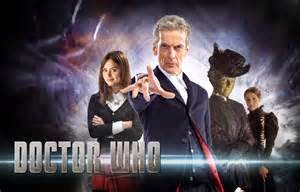 Welcome to the TARDIS, Peter Capaldi!

What a wonderful introduction to the latest Doctor we were presented with last night with the premiere of Doctor Who Series 8 (in England, seasons are called series ...), which had Capaldi - a lifelong fan of the show - stepping into the iconic role previously played by 11 other actors, the last being the whimsically soulful Matt Smith, whose swan song aired last Christmas.

The great thing about Doctor Who, the reason it has continued on over more than 50 years, is because the character is able to regenerate whenever he's about to die - a process that has the Doctor completely changing how he looks and acts.  In reality, this process happens when an actor chooses to move on from the role, as Smith chose to do last year.  It can often be a daunting task for the casting director, trying to find the next Doctor, but apparently they had Capaldi in mind right from the start (in addition to loving the show, he actually appeared in an episode in Series 4 and also the spinoff series Torchwood). 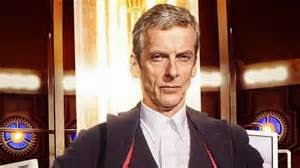 Capaldi is the oldest actor to take on the role since its massive resurgence in 2005 (which started with Christopher Eccleston, David Tennant and Smith, the latter being only 27 when he started in the role ... Capaldi is 57).  So this Doctor (who is depending on who you talk to is either the 12th or the 13th - Smith was officially considered the 11th and John Hurt was introduced in this year's 50th anniversary special as the 12th, though in the line of regenerations is actually the 9th because his Doctor regenerated into Eccleston's\, who is really considered the 9th ... have I lost you?) is going to be a far cry from Smith's man-child one.  He already seems a little darker, a little colder, but it's going to be fascinating watching where these new travels with him take us. 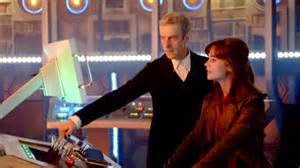 No doubt the Doctor's current companion Clara (Jenna Coleman) will be dealing with that right along with us (the companion is thought to be the voice of the audience, often thinking, feeling and expressing what the masses might feel).  It's bee thought that Clara had a bit of a crush on 11 (Smith), but now that same man is old enough to be her father, and the change happened in an instant, so there is clearly an adjustment period, for both her and us.

For me, I've had the chance to get used to the idea of a new Doctor, which I didn't before, as I pretty much binged watched the show from Eccleston's premiere straight through to and through Smith's.  So I went right from Eccleston, who I liked, to Tennant, who I loved (still my favorite Doctor), to Smith (that took some time).  But bidding Smith goodbye last December and now hello to Capaldi, I'm ready for the adventure to continue with this new Time Lord.

So to Capaldi, I say Fantastic, Allons-y, Geronimo, and whatever catch word his Doctor adapts!

New Doctor Who airs Saturdays at 9pm on BBC America.  Past series are currently streaming on Netflix. 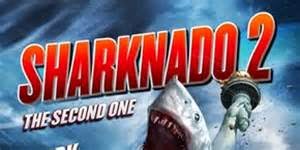 Well, I've finally gone and done it.  Caught up with a little piece of TV pop culture known as Sharknado.

I have never partaken of SyFy's infamous so-bad-they're-good creature features before, but I got a chuckle out of the sequel's sub-tag line, "The Second One" and figured I had to see what all the hilarious fuss was about.  So I recorded the double feature and settled in for the craziness.

My goodness.  Wow.  The first hurricane to hit Los Angeles brings with it mega waves that spool sharks into the streets and sewer systems, through Santa Monica, into Beverly Hills and Hollywood and eventually up into Van Nuys.  Being a resident of the city, I naturally recognized the many landmarks affected and watched them destroyed by flying sharks.

Oh, in case you didn't already know, they were flying because water spouts became tornados that picked up the many sharks, therefore making them - you guessed it - sharknados.

Fighting the good fight are Ian Ziering (Beverly Hills, 90210) and Tara Reid (American Pie) as Finn and April, ex-spouses who take down the sharks with guns, chainsaws and homemade bombs.  It is one f-upped adventure to survive, and there are many casualties along the way.  But this is by no means quality filmmaking.  The special effects are quite laughable, the continuity is ridiculously inconsistent (It's raining!  It's sunny!  It's pouring!), but it's not a surprise.  In fact, it's exactly expected in films like these.  It's part of what makes them so insanely fun to watch.  And why it promptly demanded a sequel.  How can it not when the the climax of the flim features Finn cutting himself and friend Nova (Cassandra Scerbo, Make It or Break It) out of a shark that had swallowed them both whole?

Sharknado became such a phenomenon, it seems like everyone wanted to join in the fun of Sharknado 2: The Second One.  Ziering and Reid returned for more action - which this time takes place in New York - and in addition to being joined by Vivica A. Fox, Mark McGrath and Kari Wuhrer, the many cameos include Kelly Osbourne, Robert Hays (playing a pilot, a humorous nod to his Airplane! days), Andy Dick, Matt Lauer, Al Roker, Kelly Ripa, Michael Strahan, Judd Hirsch (another humorous nod - he plays a Taxi driver), Shark Tank's Daymond John (get it?), Perez Hilton, Robert Klein and Wil Wheaton.

The flick certainly doesn't fail to up the insanity.  The opening sequence finds Finn successfully crash-landing the 747 he was on with April, who were on their way to the Big Apple for a book signing (she wrote the natch best-seller How to Survive a Sharknado).  See, the pilots got sucked out of the cockpit after flying sharks took out the engine and disabled the jet.  Duh.  Also among the flight's casualties are Wheaton, who got sucked out the chewed out side of the fusilage, and April's hand, bitten off by an incoming airborne shark.

There's plenty of other gore and screaming and carnage in both *cough* films and the cheesy lines are among some of the cheesiest (feel free to grown and eye-roll all you want, but if you make a drinking game out of it, be warned - you won't last 10 minutes).  And yes, they even included several winks to Jaws, including the line "We're gonna need a bigger chopper."

Sharknado and Sharknado 2: The Second One are exactly what you expect, no more, no less.  But who cares.  Love em or hate em, they have secured their place in pop culture history.

And no doubt, there will be Sharknado 3.  But what will they call it?  The Third One?  Back for a Bigger Bite?  Feel free to leave your ideas for titles in the comments below!

Sharknado is currently streaming on Netflix and Sharknado 2: The Second One is replaying on SyFy Channel.
Posted by Your TV Tour Guide at 9:06 PM No comments: