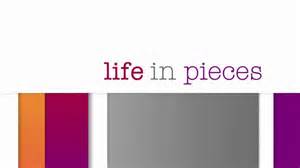 CBS premiered its new ... sitcom (?) ... Life in Pieces tonight, giving it the very coveted post-Big Bang Theory time slot.  It's got a terrific cast and promotes the comedy of  a quirky family dynamic, but how was it?

THE LOWDOWN
One Big Family. Four Short Stories.  Life In Pieces introduces the Short family (get the pun?) and their sometimes awkward, often hilarious and ultimately beautiful milestone moments as told by its various members, including middle sibling Matt (Thomas Sadoski, The Slap, The Newsroom), who may have found true love in co-worker Colleen (Angelique Cabral, Enlisted); youngest brother Greg (Colin Hanks, Dexter) and his wife Jen (Zoe Lister Jones, New Girl), who are overwhelmed by the birth of their first child; and eldest sibling Heather (Betsy Brandt, Breaking Bad) and her husband Tim (Dan Bakkedahl, Veep) who are facing a bad case of Empty Nest Syndrome. Their parents are smother-with-good-intentions Joan (Dianne Wiest, Law & Order) and John (James Brolin, Castle, Hotel), the gregarious patriarch who's searching for ways to soften the blow of turning 70. As the family's lives unfold in four short stories each week, they try to savor these little pieces of time that flash by but stay with you forever, because these moments add up to what life's all about.(Synopsis details courtesy of CBS.com) 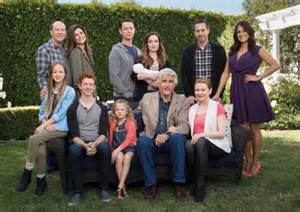 When I first started watching the pilot, I immediately thought "wow, this kinda looks and feels like Modern Family." Apparently I'm not alone: when I googled the show to see if it's by the same creators (it's not), I found that many, many others feel the same thing, except that this isn't as funny or good.  I'm not a fan of Modern Family - though I do appreciate that it's a very good and popular show - so I started doubting that I'd care for LIP.  But I came around to Parks and Recreation having not liked The Office, which to me felt like similar shows, so I continued to watch with an open mind.

Nice always to see Hanks, especially since he's resembling his awesome dad more and more, but they're playing their characters very broadly with a lot of big, exaggerated and a bit too much facial expressions.  Though I did appreciate their story, which covered what happens the days after you give birth - the destruction of the woman's nether-region, the lingering pain and a clever remedy.  But just as you start to get into the story, it's gone, not to be seen again this episode.  Being only a 30-minute comedy, you're just getting a quick five-minute taste - great for those with short attention spans but not for me.  I'd rather know we'd revisit at least once more per episode.

I'm glad Brandt gets to loosen up and have some fun, having run the dramatic gauntlet handed to her throughout Breaking Bad's run.  It was an interesting premise to have John celebrate his 70th birthday by throwing a funeral for himself.  Nice to have Brolin back on TV - kind of the reverse-Hanks, here the father instead of the son (Josh).


There were some really good minor characters, including Susan Park, Greg and Jen's doctor, and Riley Bodenstab, Heather and Tim's son's (Niall Cunningham) college-visit buddy.  I assume in future episodes various family members will cross over into each other's stories as they did in the funeral scene, but it's possible it may only happen in the fourth story.  Not sure I'm willing to come back to find out.  Didn't love it, didn't really like anyone, which does not make for a long-viewing relationship.  Actually just makes me miss Parenthood - which I highly recommend watching on Netflix.

Bottom Line: My like for this new comedy is short. Very short.

Life in Pieces airs Mondays at 8:30pm on CBS (until NFL football is over, then it moves to Thursdays).