Reviews - Grandfathered and The Grinder

FOX premiered two new comedies tonight, Grandfathered and The Grinder. Is this double dose of G-named shows a hoot or should one or both be given the boot?

What’s the fastest way to put the brakes on a cruise-controlled bachelor lifestyle? Fatherhood? Guess again. Television icon John Stamos (“Full House,” “ER”) stars in a new comedy about the ultimate bachelor who discovers he’s not only a father, but a grandfather.
Successful restaurateur and man-about-town JIMMY MARTINO (Stamos) is used to being the most suave, most handsome and most single person in the room. All that changes with the surprise appearance of Jimmy’s adult son, GERALD (Josh Peck, “The Mindy Project”), and his baby daughter, EDIE. Now Jimmy has to unlearn a lifetime of blissful selfishness and grapple with the fact that he went straight from single to grandfather in six seconds flat.
Keeping tabs on Jimmy is Gerald’s mother and Jimmy’s former girlfriend, rocker chick-turned-mother SARA (Paget Brewster, “Criminal Minds,” “Community”). Equally concerned about how Jimmy will manage these new developments is Jimmy’s restaurant family, especially assistant manager ANNELISE (Kelly Jenrette, “Audrey”) and chef RAVI (Ravi Patel, “Super Fun Night”).
- See more 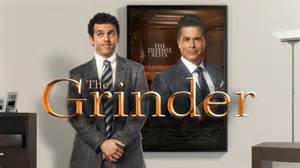 Kudos to FOX for putting two men who seemingly never age and who have had great staying power on the small screen over the years back-to-back in two comedies that have both received very positive early reviews and buzz.  John Stamos and Rob Lowe have worked in both comedy (Full House, Parks and Recreation, respectively) and drama (ER, The West Wing and Brothers & Sisters, respectively), so there's no lack of swagger and experience heralded by both leading men.  And did I mention both have aged so well?  So how are their new shows?


GRANDFATHERED - THE LOWDOWN
Successful restaurateur and man-about-town Jimmy Martino (Stamos) is used to being the most suave, most handsome and most single person in the room.  All that changes with the surprise appearance of Jimmy's adult son Gerald (Josh Peck, The Mindy Project) and his baby daughter Edie.  Now Jimmy has to unlearn a lieftime of blissful selfishness and grapple with the fact that he went straight from single to grandfather in six seconds flat.  Co-starring Paget Brewster (Criminal Minds, Community) as Gerald's mother Sara, Kelly Jenrette (Frisjy Dingo) and Ravi Patel (Super Fun Night) as Jimmy's co-worker's Annalise and Ravi, and Christina Milian (East Los High) as Edie's mother Vanessa. (Synopsis courtesy of FOX.com). 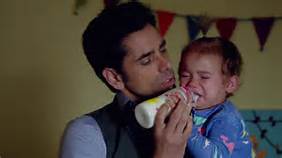 Stamos will always first and foremost be Uncle Jesse from Full House to me - and coming next year I get to see him in the role once again when Fuller House debuts on Netflix - and it's funny that once again he's playing a character that suddenly has an instant family thrust upon him.  He's of course, reluctant at first, but undoubtedly he'll warm up to the idea over time.  It may take longer now, being that he's learned he's not just a father, but a grandfather (a GILF, as many, many ads and promos have touted). This is a man who plucks out grey hairs by the strand and is a hit with the ladies young and old alike, definitely a happy-to-be-single bachelor.

There were some funny bits - an employee called Jimmy grandpa and was immediately slapped; the house band broke into "Cat's in the Cradle" upon father and son's first meeting; Sara's line "You look great, by the way. Deal with the Devil really paid off."; and a disastrous first foray in babysitting.   There is charm in this show, and Stamos plays discomfort well without it being too offensive or even unlikable.  You're rooting for him to come around and embrace his new family.  With Brewster, it took me a while to warm up to her doing comedy - she was so good on Criminal Minds that the jump to Community was a jolting one for me - and it may take a bit here, too ... she's just not a comedy actress to me. This less-punchy role seems a better fit for her, though, and I like the cast overall (and man, is there a lot of background work - Central Casting, call me!).  Not a bad start.

THE GRINDER - THE LOWDOWN
This new comedy follows two brothers: one a spotlight-grabbing actor who plays TV’s most popular lawyer and the other, a real-life, small-town attorney who has yet to find his spotlight.  Dean Sanderson, Jr. (Lowe) spent eight seasons playing the title role on the hit legal drama “The Grinder.” When his series ends, he decides to move back to his hometown of Boise, Idaho, where his brother, Stewart (Fred Savage, The Wonder Years), is poised to take over the family law firm. Despite having no law degree, no license to practice and no experience in an actual courtroom, Dean’s charisma and flair for the dramatic make him absolutely certain he has something to contribute to the firm. Co-starring Mary Elizabeth Ellis (It’s Always Sunny in Philadelphia) as Stewart’s wife Debbie, Hana Hayes and Connor Kalopsis as their kids Lizzie and Ethan, William Devane (24: Live Another Day) as Dean and Stewart’s father Dean, Sr., and Natalie Morales (Parks and Recreation) as a counselor in the firm. (Synopsis courtesy of FOX.com). 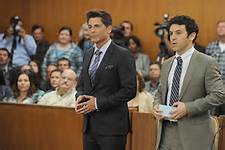 Let me first add a "welcome back to acting, Mr. Savage."  Savage has spent most of his adult years behind the camera as a director (2 Broke Girls, Modern Family), but a conversation with another father at his daughter's school led to an invitation to step back in front of the lens, and it's a fun role for him - he's plays uptight and stressed really well and very comically. And Lowe is perfect as an egotistical, overconfident blowhard.  He really developed his comic chops on P&R, and he wears this new role like a well-tailored suit.  I love the relationship of the brothers and enjoyed the pilot very much.  Gotta feel for Stewart, who is clearly #2 in his father's eyes.  I hope he gets moments to shine out of the shadow of his brother and prove he's the real deal.

Both shows give you people to root for, which is always something good for new programs.  Women do take a backseat in both shows, delegated to supporting characters, but it is what it is.  These shows center on these particular men, and I think it's a strong pairing that I hope FOX keeps together for the duration of the season.  I'm on board for both.

BOTTOM LINE:  Grandfathered and The Grinder are GO!

Grandfathered and The Grinder air Tuesdays at 8pm and 8:30pm on FOX.