I took the summer off and caught up on a lot of shows id heard much buzzing about, including Empire and Daredevil, and also caught up on the new season of Orange is the New Black and enjoyed new seasons of summer fare like Suits, Rookie Blue, Rizzoli & Isles and Under the Dome (farewell, Domesters).

So I welcome you all back with my first review of the new season, tonight's premiere of the new NBC variety series Best Time Ever with Neil Patrick Harris. 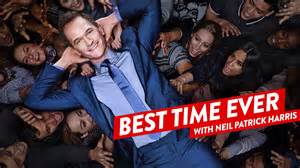 THE LOWDOWN
Five-time Emmy Award and Tony Award-winner Neil Patrick Harris hosts this live one-hour variety show where anything can happen. Week to week the show will feature appearances by A-list stars, stunts, comedy skits, incredible performances, mini game shows, audience giveaways and hidden camera pranks.
Based on the wildly popular British hit Ant & Dec's Saturday Night Takeaway, this genre-busting format and its fearless star will make for one of the best nights ever on TV, week after week.

Now I love me some NPH.  He is a singular talent and can host pretty much anything.  I'm not the biggest fan of variety shows, though, certainly not for a whole hour.  It's clear Neil is having a blast and he's got the clout to get pretty much anyone to come by.  Episode one featured Reese Witherspoon, Gloria Gaynor and Carson Daly and had Neil going undercover to prank the judges of The Voice in a segment called "Undercover."  He and Reese went head-to-head in a climbing competition 15-stories high that ended in a zipline to the finish in a segment called "Neil vs. ...". The audience joined in the fun as Neil played with them in video segments, a nationwide karaoke sing-along and an in-studio game show with amazing prizes.

We know Neil is an amazing magician, but I get frustrated when I don't know how they do the tricks, so I was indeed frustrated how he managed to seem to appear at a football game and the WEDDING of a chosen couple in the audience - a couple who later were presented with a fantastic honeymoon to Antigua.  Even more frustrating? They weren't seemingly ecstatic.  More like "Oh, that's neat" was their reaction.  Same with a lucky audience member who was "randomly" selected to play a fast-paced trivia game with the chance to win up to 16 prizes including a new car and other great stuff.  When she won 7 awesome prizes - including the friggin car - her reaction  was "Yay."  I mean, I've seen people react with more enthusiasm, excitement and gratitude on Ellen.  So what's the real story?  How much is pre-planned? Guess that's the magician's secret. Also, when he was in disguise on The Voice, he didn't really change his voice so it still sounded like him, and the wig and beard hid him somewhat, and he even sang and, while faking bad singing, still sounded just like himself ... and all the judges (Pharrell Williams, Gwen Stefani, Adam Levine and Blake Shelton) didn't recognize him?  Uh huh.

Basically, not a big fan of BTE.  It's quite a hodgepodge of stuff, ending with a grand production number that is just too much.  I appreciate that Neil has a great showcase for himself and his awesomeness, but I would rather see him back on a scripted show and back to hosting award shows.


Bottom Line:  Not the best viewing time ever for me.

Best Time Ever with Neil Patrick Harris airs Tuesdays at 10pm on NBC.